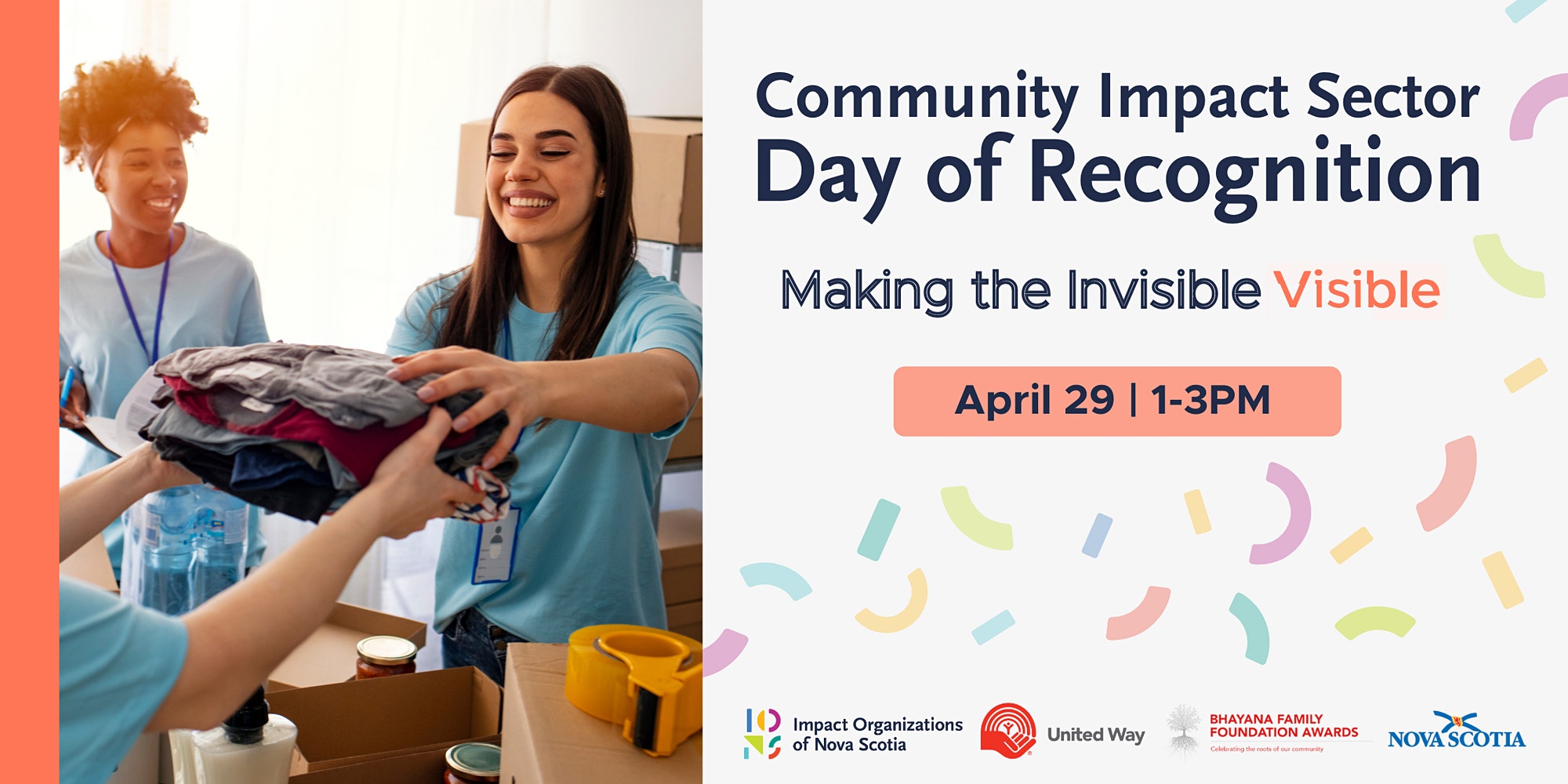 You’re invited to a special event April 29th to celebrate the contributions of the Community Impact (Nonprofit) Sector in Nova Scotia!

Join us in celebrating the people and the impact organizations (nonprofits) that tirelessly serve our province, strengthening our quality of life and delivering a range of vital services to meet the needs of those in Nova Scotia.
Employing over 20,000 people, this sector strengthens our quality of life and delivers on impact. It provides housing and language services to newcomers; offers breakfast programs in schools, coordinates mental health outreach and social interactions to seniors; empowers and mentors youth from 2SLGBTQIA+, African Nova Scotian, and Mi’kmaw communities; delivers sport and recreation programs; saves endangered species and wildlife; provides a safe haven for women and non-binary people experiencing gender-based violence; advocates for climate justice; creates art and music programs; and so much more.
Hundreds of thousands of Nova Scotians benefit from the Community Impact Sector every day. Those who work in the sector are passionate, strategic, diverse, innovative, and humbly committed to their work. Looking back on the past two years in particular, the sector has persevered through it all. Some words of appreciation, and time to pause and reflect on accomplishments are overdue.
It’s time to celebrate! Please join us virtually for the festivities on April 29th from 1-3PM. Hosted by Portia Clark from CBC’s Information Morning, there will be awards, words of inspiration, and live artistic performances.

Portia Clark is the host of Information Morning for Mainland Nova Scotia on CBC Radio One. Portia is an established journalist with a solid reputation as a trusted interviewer who has covered some of the country’s biggest stories throughout her 20-year career with CBC. Her first introduction to the airwaves was working as a reporter, producer and newsreader in Halifax in 1998.
In 2000, she moved west to CBC Edmonton for a news-reading job, which was followed by a year co-hosting the morning show, Edmonton AM, then making the switch to television to host Edmonton’s supper-hour newscast, CBC News Edmonton. In 2012, she went back to radio to host the Edmonton afternoon current affairs show, Radio Active. She returned home to Nova Scotia with her family in April 2018 to take on the role of host for Information Morning.
Portia has strong roots in rural Nova Scotia, having grown up in Sandy Cove on Digby Neck and in Bear River. She graduated from Annapolis West Education Centre, holds a BA in Philosophy from Dalhousie University and is a graduate of the Broadcast Journalism program at the British Columbia Institute of Technology. She is actively involved in her community and enjoys participating and supporting a variety of local community events.

Drummers From Home is a unique collective of five individuals who have come together out of their love of African and world beat rhythms. Over the years the group has developed a unique chemistry and work hard to incorporate the various backgrounds and personalities of the players. This afternoon, we have two members of the group with us.
Ayo Aladejebi has been drumming since he was a youngster in Nigeria. His drumming has strong Yoruba, southern Nigerian roots. Ayo helps to anchor many of the compositions with polyrhythms.
Robert Leek came to Drummers From Home in 2017. Originally from New Brunswick, Robert brings strong Carib and African rhythms to the group. His spacing and accents give creativity to the playlist.

Bria Miller (they/ she) is a Queer, Black + African Nova Scotian multidisciplinary visual artist born and raised in Yarmouth, Nova Scotia, now residing and creating within North End Kjipuktuk (Halifax), Nova Scotia since 2013. Bria has worked as a professional artist, curator, graphic facilitator, arts educator, event organizer, DJ, and poet amongst many other odd art jobs since moving to Halifax in 2011. Over 2022, their goal is to create new works and collaborate as much as possible while growing their small business, Bria Makes Things

Michael Saulnier is a musician from Clare, Nova Scotia. He is the singer of the new acadian pop punk band Peanut Butter Sunday and also plays folk music. When he doesn’t have a guitar in his hands, he spends his days at JD Composites building houses made of 100% recycled plastic bottles.

Guyleigh Johnson is a Published Author, Spoken Word Artist, Community Advocate and Arts Facilitator from North End Dartmouth. She has a passion for writing and speaking about inner and collective healing. As a Arts Facilitator she teaches youth about the power of word’s, mindfulness and mental health. She’s published two books Expect The Unexpected and Afraid Of the Dark dedicated to youth in her community. In 2018 she won the Ancestral Roots Award for the Written/Visual Arts category presented by the Delmore Buddy Daye Learning Institute. She recently started a job at Dalhousie University as an Assistant Registrar for Admissions & Recruitment. Whether you follow her on social media or know her in real life she is starting the conversation for change. Her purpose is to encourage, empower and educate, while creating pathways and opportunities for youth in and around her community!

General Khan is an artist and community organizer, born and raised in Kjipuktuk, Mi’kma’ki (Halifax, Nova Scotia). For General Khan, poetry is an expression that is tied to her identity as a displaced Pashtun. Her art style is influenced by her lived experiences with oppression such as white supremacy, colonialism, displacement, racism, islamophobia, disability justice, and more. You might have seen her at protests and actions around the city. Her friends know her for her big smile and even bigger heart.

19 year-old Emma Stevens from Eskasoni First Nation (NS) has become a music
sensation all before graduating high school. With the release of Steven’s debut song “My
Unama’ki” in 2018, her musical journey was just beginning. “My Unama’ki,” a celebration of the
strength and resiliency of Mi’kmaq culture in Cape Breton has become Steven’s signature song
and is regularly a part of events across Cape Breton Island.

As an artist, Emma is passionate about bringing awareness to important issues facing First
Nations people across Canada, including the loss of language and the staggering number of
missing and murdered Indigenous women and girls (MMIWG). In 2019, Emma recorded Paul
McCartney’s “Blackbird” in Mi’kmaq to help bring awareness to the United Nations’ observance
of the International Year of Indigenous Languages. Since its release, Steven’s version of
“Blackbird” has garnered international attention and has helped bring awareness to various
efforts being undertaken to revitalize endangered Indigenous languages around the world,
notably so in Steven’s own Mi’kma’ki where there are fewer than 10,000 speakers of the
Mi’kmaq language remaining. Stevens has performed across Canada and internationally with
performances in Nairobi, Kenya, Abu Dhabi, Parliament Hill in Ottawa and the UAE for United
Nations assemblies where she sang and spoke to leaders and policy-makers from around the
world.
On July 1st, 2021, Steven’s released “I Want to Rise”, a song written to help bring awareness to
the more than 4000 missing and murdered First Nations women and girls from across Canada
and the many thousands more MMIW in the United States of America, and, as well, to help
empower First Nations youth to rise above the many challenges they face being Indigenous
youth in Canada today.

Mark your calendars and RSVP to receive the livestreaming link!